St John’s (The Evangelist) Catholic School was established in the “old” school house adjacent to the Church in 1843.

Fr Thomas Butler, who was in charge of the Richmond Parish at the time, felt there should be a school for Catholic children and set about setting up a school for the children to be “brought up in the faith”. Father Butler enagaged the services of Michael O’Keefe to establish and run the school from the first school day in 1843. The school started off with twenty pupils and by 1846 the numbers had increased to thirty.

In 1866 the Presentation Sisters arrived in Tasmania and took up residence at “Woodburn”, in Richmond, until St Mary’s Convent was completed in Harrington Streeet, Hobart. For eighteen months they workied in the school and parish and were sadly missed when their time came to an end.

In 1888 the Sisters of St. Joseph arrived and remained at school for almost 100 years, from 1888 until 1984, facilitating a Catholic education for countless generations of students.

The first lay principal in the 20th century, in 1984, was Mrs Elizabeth McMahon, who sadly passed away “in office” in 1990. Mr George Toepfer was Principal for ten years and was followed by Ms Denise Long in 2002. Mr Cameron Brown was Acting Principal in 2007, before Mrs Long returned to her position. Mr Marcus Donnelly was principal from 2011 – 2017 and was followed by Mrs Megan Richardson, who is the current principal.

The school moved to its present location, but still within the parish and school grounds, in 1925. Since that date the school has grown from two rooms in that year to seven classrooms and a multipurpose room in 1993. Additions were completed in 1974, 1986, 1990, 1992/2000 and the Kindergarten classroom was added next to the Infant block for the start of 2001. The Kindergarten was established in 1994 and conducted in the original School House until the end of 2000. In 2007 and 2008 the completion of Comoradh (our multi-purpose hall) and two general learning areas and refurbishment of the staff amenities and landscaping of the front of the school was completed. Further refurbishment of the remaining areas and the landscaping of the early and middle years areas is taking place currently, in 2010.

The school population has grown from around one hundred in 1983 to just over 220 in 2001. Further enrolment growth took place from 2003 onwards. The school enrolment has risen to 288 in our Prep to Year 6 classes, and 48 in our Kindergarten. The school is organised into mixed learning groups and the Kindergarten is organised into two groups who have three full days of Kindergarten each week. With the housing development in Richmond and the surrounding districts, further growth can be expected.

“Love one another as I have loved you.” 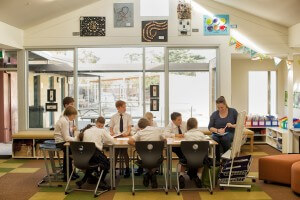 Here we have a comprehensive list of our school policies for you to look at. They can be downloaded by simply clicking on the titles. You may print these off if you would prefer a hard copy.

Risk and Adventure in Outdoor Learning